I heard about Agnes Baker Pilgrim, better known as Grandma Aggie, years before I finally met her.  Once Chairperson for the International Council of 13 Indigenous Grandmothers, 93-year-old Native American spiritual elder continues working to make the world a better, more loving place.  Following is a story I wrote about this colorful activist published in Ruralite Magazine.

An unfiltered sun beats down on 93-year-old Agnes Baker Pilgrim, who sits in her wheelchair near horse stalls at the Albuquerque, New Mexico, fairgrounds waiting for riders to put the finishing touches on their regalia.

The aroma of hot dogs, Indian tacos and bread, alfalfa hay and anxious horses wafts across the arid earth.

Recognizing Grandma Aggie—as she is known worldwide—a man reverently approaches, kneels and asks for prayers and a blessing from the spiritual elder.

Aggie has traveled from Grants Pass, Oregon, to Albuquerque with her daughters, Nadine Martine and Mona Hudson, and dear friends Bill and Gwin Stam, who founded the All Nations Native American Veterans Memorial in Jefferson, Oregon, in 2013.

They have come a long way at great expense to ride in the Horse and Rider Regalia Parade and show the regalia Gwin has made by hand.

Aggie is the oldest living member of the Takelma tribe of Oregon, which may date back 20,000 years.

She descends from Native American royalty. Her grandfather was George Harney, the first elected chief of the Confederated Tribes of Siletz. He was part of the Oregon Trail of Tears: a 200-mile forced march north and resettlement in 1856.

A living treasure and cultural legend, Aggie has traveled the globe as an ambassador for Mother Earth, speaking, teaching, praying and sharing the stage with world leaders, including the Dalai Lama.

She was elected chairwoman of the International Council of the 13 Indigenous Grandmothers at its founding in 2004.

A Difficult Upbringing
Though she is a calm, grateful grandmother now, Aggie’s path has not been easy.

Delivered September 11, 1924, by her grandmother in Logsden, Oregon, at the head of the Siletz River, much of Aggie’s childhood was spent caring for her little brother and sick mother while her father and older brothers were away logging.

Growing up in a house without running water or electricity, she hauled water from the creek for garden plants, cleaning, bathing and cooking on the wood stove.

Near age 8, Aggie recalls standing on an apple box, cooking for her bedridden mother. She also remembers her mother’s death. She was 12. An Indian woman, Mother Pearl, came to help.

“I was crying and trying to fix my mom, bathe her, wash her up and dress her and put her in a new nightgown,” Aggie writes in “Grandma Says: Wake Up World.”

After her mother’s death, Aggie and 8-year-old brother Lloyd Harney, known as Gib, stayed in the house alone about a year, while their father worked. They then moved in with an older brother.

Aggie faced racism and prejudice, with signs in some business windows saying, “No dogs or Indians allowed.”

Aggie remembers girls from Switzerland being bullied on her school bus.

“I didn’t like two or three people beating up on one, so I put a stop to that,” she says. “I duked it out with those that were picking on them, and they stopped.”
Aggie has been fighting ever since, using her voice and knowledge to fight for those unable to fight for themselves.

She has been a stock car driver, logger, musician, jail barber, bouncer, minister and author. She returned to college at age 50 after receiving a scholarship, earned an associate degree at College of the Redwoods, then a bachelor’s degree in psychology and Native American studies at Southern Oregon University.

“I was the only one in my family that ever went to college and graduated,” Aggie says.

She was the first, but not the last. Thirteen family members and counting have graduated from college now.

In the early 1980s, Aggie had two bouts with cancer—first in her colon and later her breast, which she eventually had removed.

“I am a survivor,” she says. “I had months and months of chemo and radiation. My hair nearly all come out. They call me a miracle patient, the doctors. God healed me and I am still doing good.”

Walking the Spiritual Path
Aggie says the moment that defined who she is now and how she should spend her time came at about age 40.

“Spirit talked to me, God talked to me years ago, calling me to walk the spiritual path,” she says. “I said, ‘I can’t do it. I am not worthy. I haven’t lived a good life for you.’ He said, ‘You are going to walk this spiritual path!’ He kept coming and kept coming, speaking to me in dreams. Finally, I said, ‘All right.’

“When I accepted to follow the spiritual path, I went to all of my children and I told them, ‘I may have hurt your feelings at times, and I am about to do the spiritual walk, but I want you to forgive me before I start this.’”

She learned in time Spirit wanted her to become a voice for the voiceless. 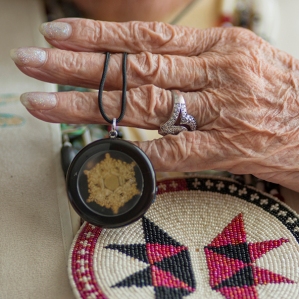 A cherished medallion given to her by Masaru Emoto

“God told me, ‘I don’t want you getting mad at anything you see, anything you have heard or anything you have read,’” she writes in her book. “‘That’s hard on your heart. That’s too much tension, so don’t do that. You got other things to do.’ I said, ‘Yes, God.’ I’ve been minding God all these many years.”

For Aggie, the voiceless extends beyond the poor, young, old, compromised, forgotten and even the animal kingdom. It includes the elements: trees, grasses, earth, lakes, rivers, oceans, air and fire. The calling has led her around the world.

While Aggie cares for all living things, her concern for water has drawn particular attention. Masaru Emoto, who taught that human consciousness has an effect on the molecular structure of water, asked her how she knew water could hear.

“I said, ‘God told me that long time ago,’” Aggie says. “We were all water babies and water could hear and we should thank the water for our life. I said, ‘You can’t live, just a few days, without water.’

“We don’t thank the water as the ancients did. We don’t talk to it. I am always thanking the water. When I take a drink, I say, ‘Bless you, I love you and take care of me, wash out all of the baddies inside.’ I don’t drink water until I put it up to my heart and I say, ‘I love you.’ I don’t take a shower before I tell the water I love it. Or flush the toilet or wash my hands.

“If I am riding in a car and there is a river, I bless it. If I’m riding over a bridge, I bless the water. If I am in an airplane and look out and see water, I bless it. Because I am grateful.”

A Lasting Legacy
Beneath the kind, content grandmotherly disposition is a fighter with a fiery spirit who cannot stand by idly and watch injustice without jumping into the fray.

A tireless worker, Aggie continues as an ambassador for peace. Her message is uncomplicated, yet challenging: Be honest. Be kind. Be thankful. Take care of the natural world. Thank the Creator. Honor and listen to your elders. Don’t take more than you need. Try to make the world a better place. Become a voice for the voiceless.

This has become her gospel.

“It’s been an amazing life,” Aggie says with gratitude.

She has buried three husbands, her parents, all of her brothers and sisters, and three sons. She still has three daughters: Sonja, 71; Nadine, 68; and Mona, 66.

“God is good to me,” Aggie says. “There isn’t a day goes by that I don’t bless the Creator for giving me one more day. And through it all, my God has helped me with it all. God has helped me over the hard places, that’s for sure.”

As Aggie nears her 94th birthday, her family believes it may be time for her to slow down and enjoy her golden years. But getting her to sit still will be a challenge.

“She is phenomenal,” says Nadine, who lives with her mother. “She is the Energizer bunny without batteries. I can’t keep up with her. She says yes to everything—to anybody, anything and anywhere. I’m the bad guy who has to say no. I am her paper brain. 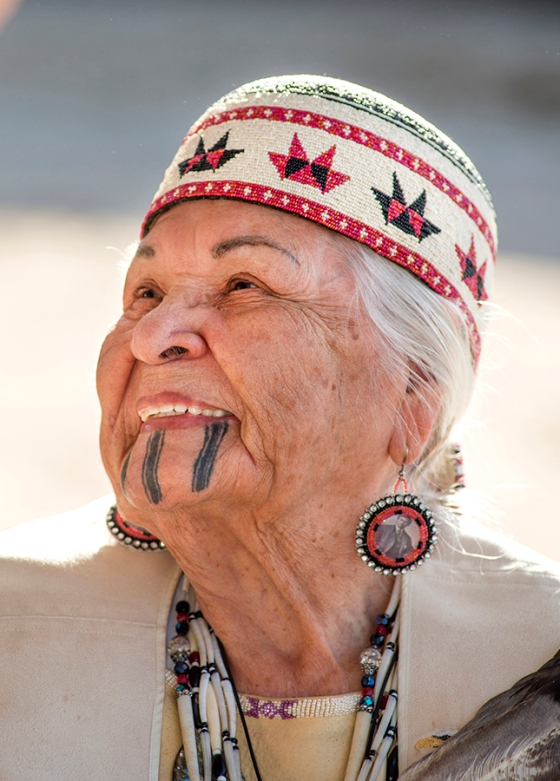 “It has been a blessing being with my mother through all of the good, bad and ugly. Together, we are like yarn making a sweater.”

The mission of Grandma Aggie may best be expressed in comments she made at a gathering of the indigenous grandmothers, which she recounts in her book.

“We are all colors,” she writes. “Everything that you’ve been doin’ is what the Creator is wanting us to do—to help people to grow and care about themselves, to be happy with who they are, to accept life and to care about themselves so that they have a purpose in their community, to be a voice.

“God is in everybody’s heart if they will just listen. We are all connected. We are all from the same God. We just walk different paths.”

For more information about Grandma Aggie and her work, visit www.agnesbakerpilgrim.org and www.grandmotherscouncil.org.